Was born and bred in Pretoria and from a very young age he knew that he wanted to be a veterinarian, driven by his love and passion for all animal life.

In 2009, he finished his BSc Animal Science degree and in 2010 he graduated with a BSc wildlife management honours degree, both at the University of Pretoria. In 2015 he obtained his BVSc Veterinary science degree at Onderstepoort. Even though he loves and cares for small animals on a daily basis, he also has a special interest in wild life. In his spare time he enjoys the outdoors with activities such as camping and fly fishing. He is a family man and spending time with his wife, new baby boy and his Labrador, Luka is the  priority in his life.

Is originally from Cape Town and the
newest member of the Wet Nose  team.

She completed her degree at
Onderstepoort in 2018 and completed
her community service year at Themba Animal Clinic in 2019. She is always enthusiastic with a smile on her face and enjoys working with both animal patients as well as their owners. Dr Bergh has a special interest in small animal surgery and in her spare time she enjoys the outdoors and camping with her husband and friends.

Was born and grew up in Kempton Park. She obtained her Veterinary Nursing Diploma at Onderstepoort in 2013.

She further expanded her studies by
completing the Hills Puppy Training in the beginners, intermediate and advanced categories. She is currently doing a two year diploma in Animal Behaviour. In her free time she loves taking her three dogs on walks and also enjoys baking and gardening. She especially has a keen interest in succulents and sees herself as a keen collector of different species. 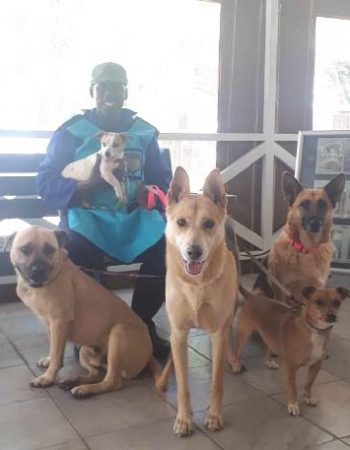